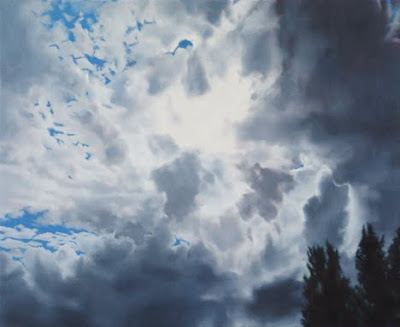 April Gornik
Spinning Sky 2005
Oil on Linen 25" x 30.5"
April Gornik lives and works in New York City and in North Haven, Long Island, NY. She has work in the Metropolitan Museum of Art, NY, the Whitney Museum of Contemporary Art, NY, the Museum of Modern Art NY, the National Museum of American Art in Washington, DC, the National Museum of Women in the Arts in Washington, DC, the Cincinnati Museum, the High Museum of Art, Atlanta, the Modern Art Museum of Art Fort Worth, the Orlando Museum of Art, and other major public and private collections. She has shown extensively in the United States and abroad. Aprils most recent one-person show in New York was at the Danese Gallery in Chelsea. She will be representing the gallery at the ADA Armory show in February 2010.
Posted by Mixed Media at 3:32 PM