Bijou LeTord
Posted by Mixed Media at 11:44 AM 0 comments

Kandinsky at The Guggenheim 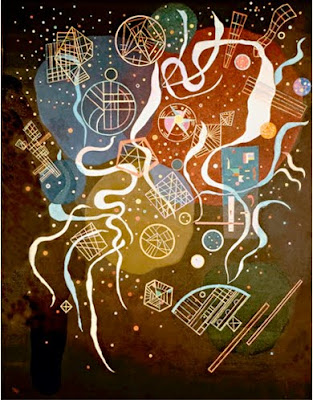 Kandinsky at The Guggenheim
September 18th, 2009-January 13, 2010
Wassily Kandinsky (b.1866, Moscow; d. 1944, Neuilly-sur-Seine, France)
This exhibition is curated by Tracey Bashkoff, Solomon R. Guggenheim Museum, New York; Christian Derouet, Centre Pompidou, Paris; and Annegret Hoberg, Städtische Galerie im Lenbachhaus, Munich
Kandinsky was a pioneer of abstract art and a brilliant theorist. His inspiration was derived from the landscape as well as from music. Kandinskys work is part of the core collection of the Guggenheim Museum. Solomon R. Guggenheim was first introduced to Kandinsky's work through artist Hilla Rebay who was commissioned to paint Solomon's portrait. While she was painting his portrait she talked about innovative painting that was taking place in Germany. Hilla Rebay organized a trip to see Kandinskys canvases and Solomon was impressed. He wanted to bring the work to the United States and began collecting in 1929. Ten years later Hilla Rebay and Solomon opened the Museum of Non-Objective Paining in New York. In 1943 Frank Lloyd Wright was commissioned to design the Solomon R. Guggenheim Museum which was largely inspired by Vasily Kandinsky's work. Today the exhibition is widely attended as we celebrate his work and the 50th anniversary of the Guggenheim Museum. Heartfelt thanks to Hilla Rebay and her passion for abstract painting and innovation in the arts so that many years later we can attend this exceptional exhibition.
Posted by Mixed Media at 9:36 AM 0 comments 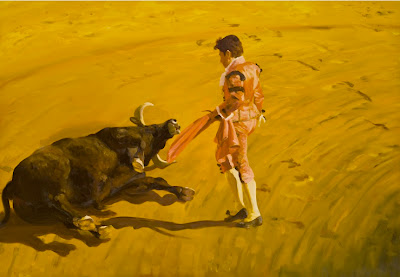 On 31 october 2009 the Mary Boone Gallery will open at its Chelsea location "Corrida in Ronda", an exhibition of paintings by ERIC FISCHL.

The subject of this new series is the Corrida Govesca held each September in the Andalusian town of Ronda. The toreros, or bullfighters, dress in 18th century attire as in the era of the Spanish painter Goya, who designed their distinctive costume. This theatrical and picturesque tradition, rich in the history of art and literature, persists in the face of increasing sentiment that it is outdated and inhumane. As in his earlier depictions of suburban America, the French Rivera, India, and Rome, Fischl here captures particular customs through color, viewpoint, and attention to ritualized gestures. Working from his own photographs, in these eight large paintings Fischl situates the bull as the crux of each composition. The intense Mediterranean light is devised to sharply divide each image between areas of dazzling color and dark shadow enlivened by Fischl's characteristically deft handling of paint.